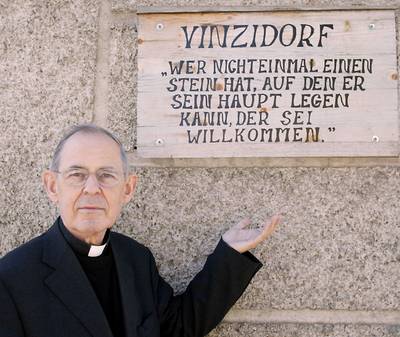 Wolfgang Pucher was appointed parish priest of St. Vincent's Church in Graz in 1973. In 1991 he launched the VinziBus initiative, which today provides meals to 70 homeless people per day. This was followed by the foundation of VinziDorf, a long-term hostel for the chronically homeless. Since its foundation Graz has been free of homeless people. Since then over 30 additional initiatives have followed, among them VinziBett, VinziHaus, VinziHelp, VinziMarkt and VinziRast, in which a total of 450 people can find accommodations and 500 people can be fed per day. With his projects Father Pucher succeeds at providing help to socially disadvantaged, destitute and homeless people on a daily basis.

Together with the Essl Foundation, a special project will be established with the prize money from the Essl Social Prize 2012: "Housing First" is an innovative approach to permanently liberating homeless people from their situation. The concept was first implemented in New York in 1992 as "Pathways to Housing". The basic idea was to provide a place to live for homeless people and, combined with intensive psychological support, to carefully reintegrate them back into society. In Boston the concept was taken up under the name "Housing First" and developed further. Recently the idea has also been implemented in Europe, so far in Amsterdam and Helsinki.
The Essl Social Prize 2012's prizewinning project, the first "Housing First" project in Austria, is to enable independent living for homeless people in Salzburg again in three years.

Homeless individuals are provided accommodations in affordable rental flats distributed throughout the city and given support there by trained social workers for several years. Each resident receives the support necessary to work on psychic traumas and re-building self-confidence. Ultimately the individuals are to remain in their rental flats on a permanent and independent basis and to become socially stable.
Previous experience attests to a remarkable 70 to 90 percent chance of success for the model.
"Housing First" has been developed in Salzburg in the last few months together with a large number of experts and in dialogue with the province and city of Salzburg, housing cooperatives and many others social organizations active in Salzburg. In the first year the project launched with ten flats; after three years there are to be about 50.
After the successful pilot project in Salzburg "Housing First" is to be implemented in other large cities in Austria as well.